When it comes to music with a spiritual spin, there are only a few other artists as far out on the cutting edge as Kalya Scintilla and Eve Olution. From Yaegon Lamagaia’s more up-tempo psy project Merkaba, to the deep bassy vibes of Kalya Scintilla, his sound synthesizes elements aligning in both ancient and modern, creating a techno-shamanic mystery religion in its wake, with the goal of mass initiation. His commitment to music doesn’t end there however, as he is also head of a music collective also titled Merkaba Music. Yaegon is a man with a vision and the self-awareness to know that the future is his to create. Eve is a storyteller and visionary director, with an extensive background in theatrical performance. Through movement, she sets forth intentional ritual focused in mythology. Eve is his divine feminine counterpart, which together form a perfect storm of Hermetic proportions. Their art is the living image of the timeless dance of matter and consciousness, the immanent and transcendent, time and eternity. True to their vision, to make music for a better world, they are taking on a philanthropic motive in their continued and upcoming Earth Heart shows in Denver and San Francisco on January 6th and 7th, 2017.

In 2016, their intention continued and they provided much needed awareness. “Trees+water=life,” is their working philosophy; reforestation and water preservation is their goal. To preserve the Earth is to preserve our future, the love of which is evident in the fabric of every dimension of his music. “In fall of 2015 Earth Heart placed Seeds in the hands of all those who came to see us around the U.S. to aid the Bees & Butterflies. This year we would love your help in planting Tree Seedlings,” Eve said of the tour. In addition to providing the opportunity to plant trees, Earth Heart will also be collecting donations from the audience. The artists will also be donating a portion of their own pay to the Tree Sanctuary of Ahu Lani, a certified member of the Conservation Reserve Enhancement Program. Ahu Lani also offers an ‘adopt a tree’ program that they sponsor.

Kalya and Eve Olution will be teaming up with the Desert Dwellers for their performances, delivering an evening of transcendentally unrivaled bass music. You truly could not ask for a better duo of artists with a deeper vision, from which the depth of their sound rises. Desert Dwellers have been on the scene since the early 90’s and are among the fundamental pioneers of the psychedelic bass sound. Hailing from the far ends of each hemisphere, the range of sound explored in these two acts alone span everywhere in between in their development, that come together in a concrescent unity of world music and bass culture. Their vision like their music is a celebration of life and humanity at its most transpersonal levels.

The reforestation initiative rising out of their Earth Heart vision is an almost natural consequence of Kalya Scintilla’s latest release: Listen to the Trees. The album is a further elaboration of that deep, bassy, midtempo sound, that sounds like some kind of mystical journey through the Tantric Bardo, the intermediary state between life and death. “Turn inward, and look at yourself”, the second track, Acacia, bids you midway through its story. Many of his tracks feature a gypsy-esque strings line and a Native American flute, adding a sacred subtexture over his basses of consciousness altering squish. Yet at the heart of these journeys to the center of the Tao thumps a funkiness bouncing with acoustics and compression of a techno-shamanic resolve that moves you with psychic-like precision. What Kalya Scintilla, Desert Dwellers, and what every artist have stemming from their roots is a whole new evolutionary path of electronic music; one that is intimately tied with visionary art and the greater culture. 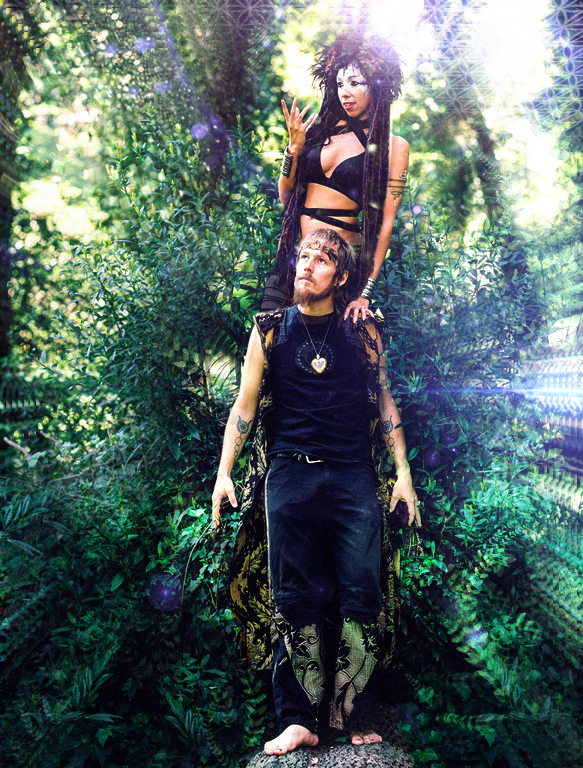 The bond between these two forces is only going to deepen in the coming years. As it does, Kalya’s music and their performance as one will evolve as well. This is already beginning to take shape through his involvement with Eve Olution. Eve began her career with Yaegon back in 2012, and has a great presence on the Open Ancient Eyes album, the first of a three part concept album. Many of Kalya’s songs have a deep sense of profundity, a sense which has up to this point reached a peak in Open Ancient Eyes. Eve’s presence brings a new life and direction of intent to compliment the abstract soundscapes. The album features tracks such as The Rise of Horus, which halfway through the song makes an invocation to the god. When brought into the live setting, the performance then becomes one part music, one part ritual. This has begun to take concrete shape through what Eve has dubbed “Evokation Sacred Art.”

Evokation Sacred Art is described as “a ritual theatre collaborative creation of intentional performance with the focus on healing, awakening, and activating the divinity within all those who are connected to the experience in any way. The art of evocation dancing through the vessel of performance to allow for an alchemical experience of human expression that energetically creates a way to touch divinity with our senses that can only be felt by the soul.” Thus, we find one of many confirmations of an emerging movement of electronic dance music closely tied with visionary culture. The act combines audio alchemy and ritual theatrical performance, with visual acts of all sorts, and has the multidimensional aim of showcasing the divine feminine, empowering, and storytelling. Evokation Sacred Art will premiere at select festivals this summer, setting in motion a new chapter of the Kalya Scintilla experience. One might argue it has already begun, as Eve’s presence is already a staple in his live act, and will be present at the shows in Denver and San Fran.

With everything emerging out of Yaegon and Eve Lamagaia, it is not hard to be a fan. As they take on an initiative to make music for a better world, we too are provided an opportunity to contribute through combining recreation with activism. The reasons to support the upcoming Earth Heart shows are legion. The shows put on by Desert Dwellers and Kalya Scintilla & Eve Olution duos are completely unlike any other act you will encounter in electronic dance music, and the live act of Kalya Scintilla and Eve Olution currently stands in a liminal space in its development, and the Earth Heart shows represent a jumping off point for what is to come. Music, life, service, unity. What’s not to love?

See the flyers below for information regarding the upcoming Earth Heart – Re:Creation showcase & charity events taking place in San Francisco on January 6th and in Denver on the 7th. 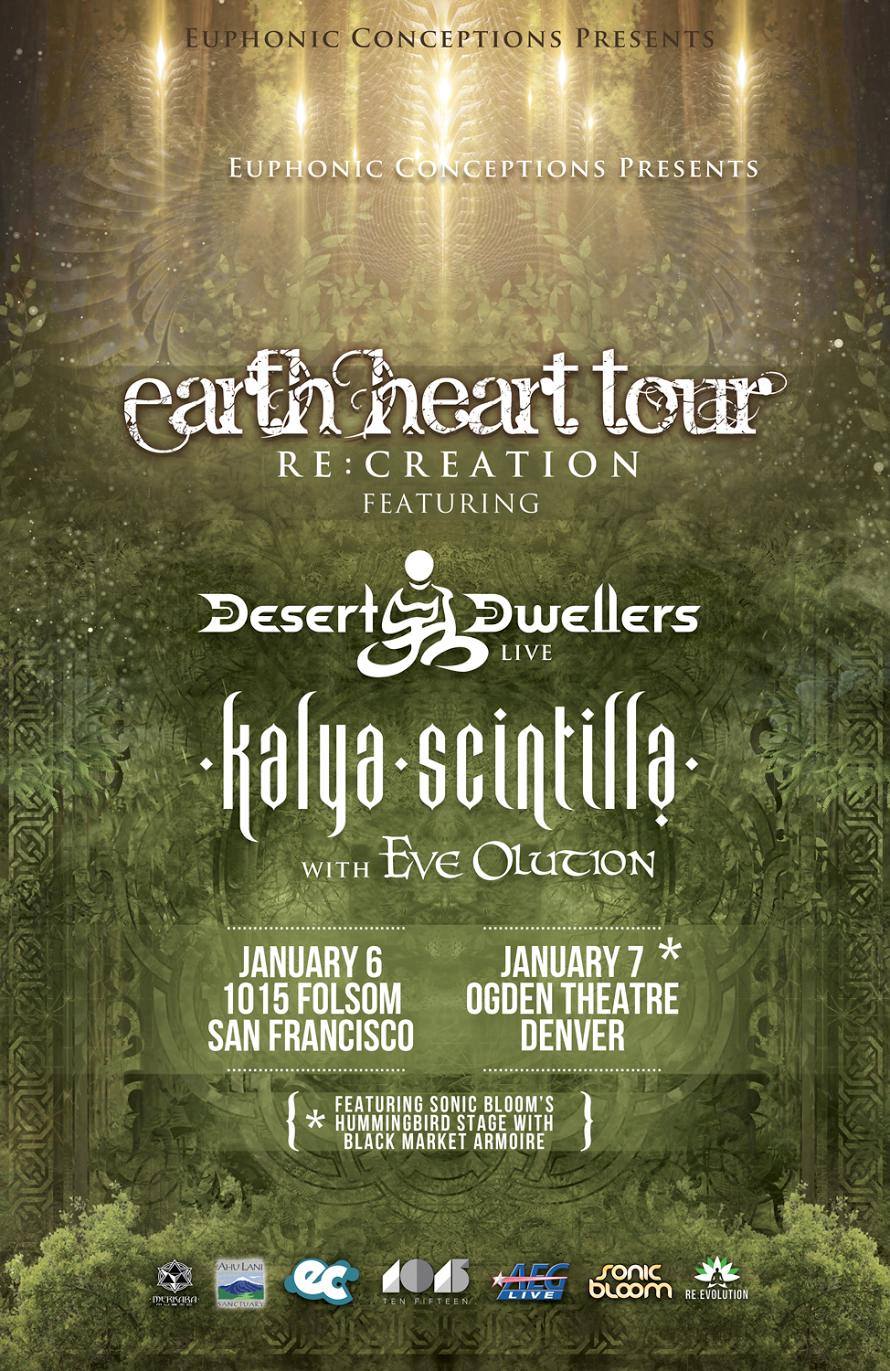