Sonic Bloom is a festival submerged in an ideology that, once tapped into, suspends you in animation, carving and sculpting your experience around it in a transformational fashion. And what is this ideology the festival molds your experience through? The unified field. And right, so perhaps it is a theory of physics more so than an ideology, yet I believe it none the less applies. Learning of the concept from famed and controversial physicist Nassim Haramein, the creators of Sonic Bloom have curated a festival wherein art, music, science, and spirituality meet at a point of singularity and, from this fantastical collision, creates an ineffably immersive experience. They have truly taken every effort towards progressive thinking, and the final result in nothing short of breathtaking.

First of all, they offset all of their electricity use through solar means, which is quite a feat considering the amount of power it takes to run every stage, lounge, bar and installation throughout the venue. As the years go on, Sonic Bloom hopes to render themselves entirely free from the use of nonrenewable resources by utilizing solar, wind and other alternative energy sources. This stands out to me as applied science in its truest form. One could also locate elements of applied science at the medic tent where a sign read “Pee here for science.” The intended goal behind their desire for your pee was to study drugs of abuse, their consistency, and effects amongst the population. The festival also featured a variety of workshops and lectures on topics such as unified field theory, applied alchemy, and permaculture. One could very easily locate a sense of holism and conservation in every scientific endeavor taking place at the festival. They not only sought to help humanity but the environment as well, holding a very spiritual mindset in their scientific approach.

Spirituality was very much alive at the festival in the most mystical way imaginable. At any given moment you could turn to one side of the festival and gaze upward toward the humbling mountains staring down from their tower peaks, and then turn toward another direction to look out upon the plains which stretched out endlessly and breathtakingly. To watch the sunrise on this unbounded ocean of land was truly a sublime experience. The art and the music itself explored roots of the deeply spiritual, as is customary of visionary culture. The entire festival grounds felt like a seamless web of artwork. It would have been impossible to throw a rock without hitting somebody in the middle of doing a live painting or interpretive exhibition. Everywhere there wasn’t already a vendor selling prints and t-shirts, you would stumble upon yet another gallery, collaboration or installation. The doorway which separated one side of the festival from the other was framed by two glowing Ankhs. Giant crystalline geometries lit the walkways between stages and every open space was occupied with some form of visual expression that speaks of the natural divinity of life. Should you attend, be sure to stop by the Oracle portal hosted by the extra-terrestrial guru Darryl Anka a.k.a Bashar. 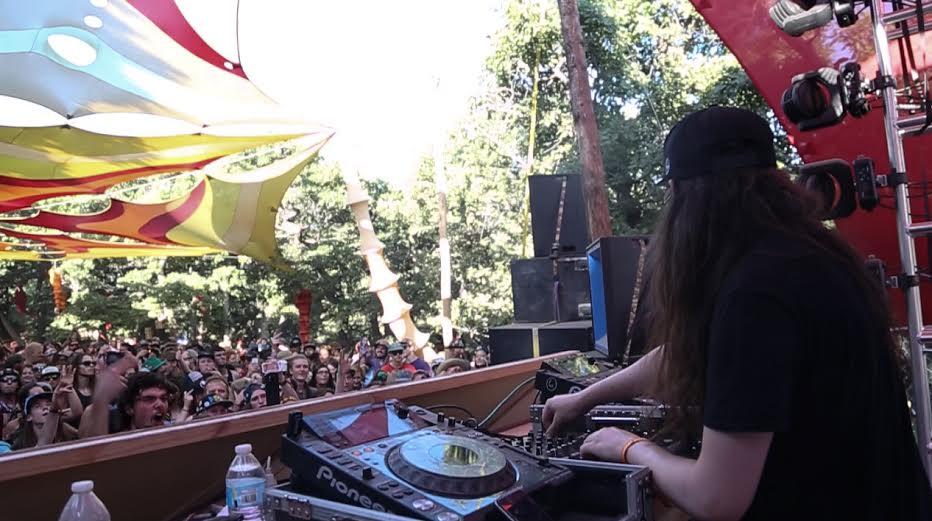 Each day began with yoga sessions on the main stage, creating more opportunities for those who seek it to attempt to unify their body and mind. This was, of course, aside from the Yoga D’OM which hosted yogic opportunities at any given time of the day. As I wandered the grounds I could feel an ever-present sense of calmness and serenity settled into the venue, a far cry from the high energy which electrified the air night after night. As I wandered, I found myself stumbling upon the Hummingbird stage, the main stage for electronic music. It was an area with an enchanting congregation of trees, which during the day was a hub for hammocks and people lounging as the shade hosted a symphony of chirping birds that would leave everyone smiling.

The festival officially kicked off on Thursday night and could not have started on a more proper note. Among its first performers were Late Night Radio and Bass Physics, two bands, or duos more precisely, which synthesize the ideologies of rock and electronic music in the funkiest way. The Hummingbird Stage began its energetic ascent with Ableton guru and downtempo producer Subaqueous before transitioning into the up and coming Colorado-native Spundose and building the vibe to a climax with the savior of glitch Space Jesus. After that, the party kept going on the Hummingbird stage late into the a.m with Ill-Esha kicking off the Silent Disco afterparty followed by Atomic Reactor and his collab with KlL SMTH: 2Nutz. Although the festival had only begun, you could already feel a swarm of energy bearing down on the grounds, titillating the tongue with electromagnetism and stimulating the senses with the electrically sweet smell of herbal remedies such as cannabis and palo santo. The energy came to an oceanic head at midnight with the Opiuo live band and their epic brand of heavy glitch hop. You could feel the low-end wobbles of the bass in your chest from way back, pumping through you like a heartbeat almost forcing you to dance, washing away your illusion of free will in the funkiest way. 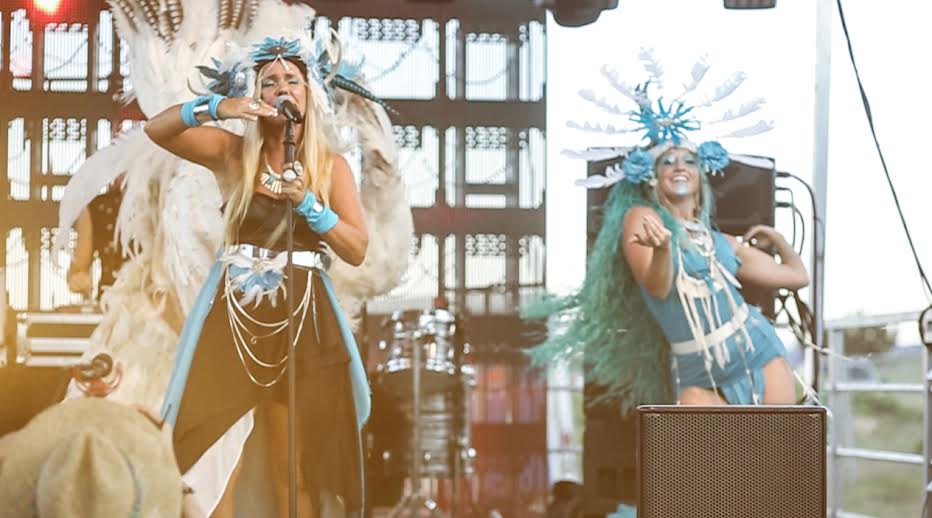 Friday kicked off with a flurry of yoga sessions, speakers, and workshops at the Yoga D’OM, Technicolor Tipi, and Permaculture hub inviting the festival goers to come find new insights, or perhaps elaborate on ones they might have already experienced, and to take them back out into their day to day life. The afternoons were ones of intention; community building which sought to strengthen our bonds with ourselves and with each other. The topics ranged from “Harmony with Natural Systems”, “Spiritual Laws to Empower Life and Career”, “Urban Permaculture”, “Transforming Conflict”, and seemingly everything in between. The music really kicked off in the late afternoon with Digital Vagabond and his deep bass which I thought perfect for a five p.m set. This was followed by a tribute to the wonderfully talented house producer Pumpkin who died in a car wreck on his way to play a festival in Texas earlier this year. We still feel his loss in the electronic music community and can say that we have never been more saddened by the loss of someone we have personally never met. We thank you Pumpkin for your presence at this festival, you are truly alive in the eyes of all of us.

The evening was electronically infused jam bands, starting off early with a set from Colorado-native group Dynohunter. The jams continued with sets from Jamie Janover & Resunator followed by his project ZILLA. ZILLA is comprised of members of EOTO and Vibesquad, who are also among the key figures in the organization of the festival. The night also featured live performances from Sunsquabi, Nightmares on Wax, and Bonobo. The highlight of the day for me, however, has got to be the set of Cualli and Living Light. Cualli is one of the great heavy hitters of psychedelic bass music, and his set Friday was exactly what I expected from him in the best way. His music alternated between smooth bass lines and wet, squishy wubs that bordered on the absurd with powerful and punishing bass vibes that commanded you to dance. You know the beat is good when you feel like you need a shower, and his were so nasty I felt as though I needed to leave the festival and go to church to confess my sins. Throughout his set he periodically pulled out his guitar to solo over his tracks, blazing melodic paths that seemed to paint the sky with luscious hues as the sun set behind him. The spirit of unity was palpable and I could feel my psychological defenses breaking down, feeling an indescribable love with everything and everyone around me. No MDMA needed. We were blooming at sunset at the speed of sound.

That blissful spirit was carried deep into the a.m when Living Light performed. Her music carries consistent vibes of deep, downtempo bass in a uniquely bouncy, funky and upbeat way. She played for hours and, rather than sounding like one track that is played after another, it kept the vibe of telling a story of the spiritual journey of some kind of cybergypsy. Truly a 10/10 performance. 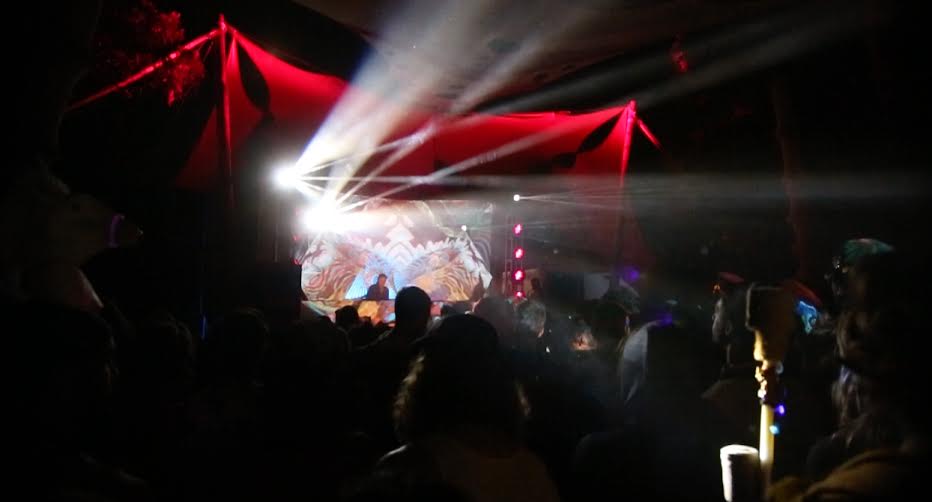 The gypsy bass vibes kicked into high gear early on Saturday. Deya Dova delivered a deeply spiritual and eclectic performance at sunset, followed by Templo and then Quixotic on the mainstage. Unfortunately, OTT had to cancel, though we were not let down as Kalya Scintilla took the stage after Quixotic laying down his deep brand of Occult bass. His set was followed by Tipper’s headlining “Journey” set. I have seen Tipper play a few times and I can say, without a doubt, the set he played at the fest was by far my favorite performance of his yet. The arrangement was transcendental and, as the sound pumped through the Funktion-1 speakers, I felt as though I was in the presence of something otherworldly. The composition of his music is flawless with an originality that is simply genius, not to mention the fact that he scratches like a mad man. After his set, the gypsy vibes carried on at the Hummingbird stage until the sun came up with sets from Clozee, Phaeleh and Govinda.

Unfortunately, my time at the festival came to an early end and I was unable to attend the final day of the festival which included the acts EOTO, Break Science, Com Truise and more. Regardless, the Sonic Bloom Unified Field experience was a spiritual one, to say the least. The music and the arts are not just a presence in Colorado, but an entire culture that must be witnessed to be believed; It is no coincidence that almost half the entire music lineup hails from that state alone.

There are many music festivals that you can shrug your shoulders and go your whole life without attending, but then, there are those at which the experience is extraordinary beyond measure, bringing with it thought, sensation and remembrance like no other, and the Unified field experience of Sonic Bloom is definitely one of them. In the mountains of Colorado, the true and living spirit of progress is alive and well.

Buckley Rue hails from Fort Worth/Austin Texas. He graduated from the university of Texas at Austin where he has a degree in Religious Studies with a minor in Psychology. He is the school’s founder of Students For Sensible Drug Policy and has a deep passion for psychedelic therapy. He is currently wrapping up a novel titled “Afterlife”, about the rise of The American rave culture, the coming revolution in consciousness, and the dawning of a new age for mankind.